Series of Victories in the Battle

Series of Victories in the Battle

Yi sun-shin became the Jeolla Jwasusa 14 months before the breaking out of the Imjin War and he took the visit to Bangdap, Sado, Yeodo, Balpo and Nokdo and set the order of administration with the just and fair ruling on the land regardless of government status or rank. And, he prepared the attacks of enemy by fully preparing for the port with war situation, and he built new battle ships, while built the world's first arm-shield battle ship, the turtle ship. Furthermore, in order to secure the military supplies and food, he requested the Royal Court to establish Dunjeon in Hae-do. 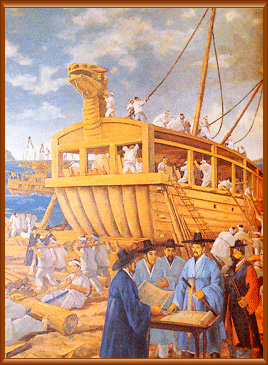 However, unlike the expectation of the Joseon government, Japanese fleet formed the invasion force with army-oriented formation and used the battle ships to come across the sea. In early times of the war, the Joseon forces could defend the sea but for they neglected the sea, the Japanese forces had no resistance on the sea to land in Busan. They built their base in Busan and began to march toward the north. The Joseon army set the defense line in Sangju and Chungju, but failed to successfully defend against the Japanese forces.

In particular, the Gyeongsang Jwasugun that had undertaken the naval defense was completely collapsed in the beginning part of the war, and Won Gyun who was the commander of the Gyeongsang Woosugun deserted the defense of Geojedo by leading only 4 panokseons to evacuate to Dangpo that the Japanese naval force moved along the coast to the west to loot, kill and arson at will. As a result, the costal area of Gyeongsang-do was devastated. With the call for rescue by Won Gyun, the Jeolla Jwasusa Yi sun-shin led his fleet to come to Gyeongsang-do in a way of engag in the battle on May 4, 1592. 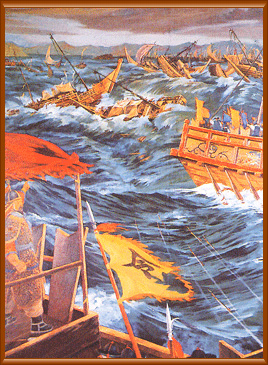 For the Joseon naval force to be victorious in consecutive batters, they were in good knowledge of the geography and tidal flow, held larger and mobile battle ships compared to the Japanese battle ships and they had the stronger fire power with the guns of cheonja, gija, hyeongja, and hwangja chongtongs, and sinjijeon, hwajeon and the like. Ultimately, the fundamental factor of victories was Yi sun-shin. He was outstanding in his strategies and tactics as well as capable of setting the role model for others, he led the battles and died of enemy shot.

Consequently, Yi sun-shin had destroyed approximately 700 Japanese battle ships for the seven years of the Imjin War and that is unprecedented case in the world's history of naval wars.