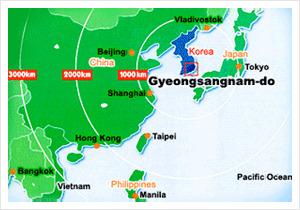 Gyeongsangnam-do is located in the southeast region of the Korean peninsula and meets Busan and Ulsan Metropolitan City on its eastern border, and Namhae on its southern border.

The geographic coordinates of Gyeongsangnam-do is of between 34° 29’ and 35° 54’ north latitude and between 127° 34’ and 129° 13’ east longitude. The longitudinal coordinates are similar to that of Kyoto and Nagoya in Japan, Kypros in the Mediterranean coast and Oklahoma in the U.S.

Located in the far southeast corner of the Korean peninsula, Gyeongsangnam-do borders the sea to the south. This coastal area influences the province considerably because it is confined by high mountains to the north, which shuts out the cool winter wind from the northwest. This creates the most moderate climates in Korea with 12 to 13℃ annual average temperature, 1,400 to 1,800℃ annual precipitation level and -0.5 and 25.1℃ of mean temperature in January and August respectively. The annual average temperature, the precipitation level and the average temperature of January and August is 14 to 15℃, 1,400 to 1,800℃ and 2.3 and 25.9℃ respectively, along its coastal area.

The Namhae coast where the Sobaek mountain range submerges, is composed of the deep sea and embayment area. With its bulging and sinking topography, the Namhae Coast made Dadohae, a collection of countlessly scattered islands. Hallyeosudo, its nearby coastal area and the battlefield of Chungmugong, is a national coastal park with Tongyeong.