Breaking out of Imjin

After the breaking up in negotiation with Joseon, Toyotomi Hideyoshi organized the invasion force and ordered to invade Joseon and set up the plan to command the war in Nagoya himself.
The Japanese forces formed with 9 division for 158,700 soldiers along with naval force of 9,000, led by Guki, Toutou and others for naval battles, and Kunibe and others led 12,000 troops to cover the back after crossing the sea. In addition, Hayagawa and others invade Busan to manage the ships along with the vast irregular forces to have entire number to exceed 200,000. When Japan invaded Joseon, the total forces were approximately 300,000 that the forces other than the invading forces had some 100,000 to remain in Nagoya and 30,000 to defend Kyoto.

The first Japanese forces that invaded Joseon first time was the Command 1, led by Gonisi. Gonisi had 700 ships for soldiers on April 13, 1592 (the 25th year of King Seonjo) and left Oura Port at 8 am and arrived in Busan in the afternoon, and they began to attack Busanjin Fortress to begin the war.

Cheomsa Jung Bal of Busan-jin that encountered the Japanese fleet fought against the enemy but killed in the battle. The enemy attached Dongrae Fortress on the following day and Busa Song Sang-hyeon also fought hard but killed in the battle too. The Gonisi forces marched Yangsan, Milyang, Cheongdo, Daegu, Indong, Seonsan to arrive at Sangju without much resistance from the Joseon Dynasty military force.

In the meantime, the Command 2 led by Gato arrived in Busan on April 19 and occupied Ulsan and passed Youngcheon and Gunwi to go through Mungyeong toward Chungju along with the Command 1. On the same day, the Command 3, led by Kuroda, invaded from Dongrae to Gimhae, and after passing Jirye and Geumsan, it went over Chupungryeong to the Cheongju direction.

Command 4 occupied Changnyeong after merging Command 3 at Gimhae, and it passed Seongju to head for Chupungryong, and Command 5 followed Command 4 to invade toward north. 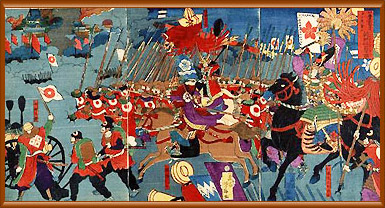 Map of Joseon Conquest by Gatoh

Command 6 and 7 kept the backside to march north, and Command 8 with Ukida landed in Busan in early May to head toward Seoul after getting the report of Seoul collapsed, and Command 9 stayed in Ilgi-do on April 24 to wait for other operations.

The report of the Japanese force invading in mass was conveyed to the central government on the forth day of the war breaking out. With the urgent report, the Royal Court of Joseon discussed the action plan, and they made the temporary action plan to defend the middle road in Joryong and Chungju, and defend the left side of Jukryeong and Chungju, and the right side of Chupungryeong, Cheongju and Juksan direction to keep Jukryeong in the meantime. For generals to take on the regions to set the plan to encounter the enemy but people who never experienced any war that they were totally unprepared.

Therefore, Sunbyeonsa Yi Il attempted to stop the Japanese force to advance further north in the Sangju area, but it was easily defeated. The soldiers in the Gyeongsang-do area were gathered in this area but there was no commander from Seoul for several days that they were shaken with the pressure of the Japanese forces, and they were all scattered around for having heavy rain and no supply of food. Therefore, Yi Il tried to form any formation by gathering hundreds of soldiers but, once the Japanese forces came around, they were defeated without a real fight.

Thereafter, Yi Il escaped along and conveyed their defeat to the government in Mungyeong and tried to keep Joryeong, but after hearing the news that Provincial Sunbyeonsa Sin Lip was in Chungju that he went there to join him.

The Gonisi Command came on April 26 over Mungyeong Saejae to reach Chungju on the next day, and Sin Lip led 8,000 troops to fight in Tanggeumdae with their back against water. As soon as the Japanese forces attacking with the rifles from three directions, Sin Lip went into the enemy base alone but failed, and he committed suicide in Dalcheon River with entire forces killed.

Thereafter, the Gonisi Command merged with the Gato Command in Chungju but changed its direction to go toward Yeoju, Gyeonggi-do to cross the river to detour Yanggeun to march toward east. And the Gato Command went Juksan and Yongin to reach southern basin of Han River. Command 3 and Command 4 of Mori also reached Seongju on April 25, and it went beyond Chupyungryeong to bring down Cheongju Fortress and marched toward Seoul after Gyeonggi-do.

The urgent news kept coming from the Japanese forces but there was no resolution of officials to defend Seoul until it was encountered with the news of defeat from Chungju. For some officials who asserted for evacuation of King Seonjo, they were unable to make the powerful assertion under the consensus. On the 28th, it accepted the proposal of officials, Gwanghae-gun was set as the prince in line, and the officials worn the military clothes, and on the next day, 29, the news of defeat in Chungju, King Seonjo had to evacuate on the night. 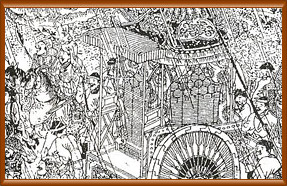 Prior to have King Seonjo to Seocheon, Prime Minister Yi Yang-won was appointed as the Yudo General to defend the capital and Kim Myeong-won as the Dowonsu to defend Han River, but the defense was so weak that it could not defend against the Japanese forces at all. At night, the report of Yi Il arrived for "Japanese invader to reach the capital anytime soom", and King Seonjo was hurried in changing to the military clothes to take the evacuation on the way and his son, Gwanghae-gun, followed him.

The Japanese force arrived in Seoul on May 2~3. At this time, Dowonsu Kim Myeong-won felt the impossibility of defending Han River as the bullets of the enemy was falling on to Jecheonjeong, the commanding main quarter, he retreated to Imjingang. Accordingly, Yudo General Yi Yang-won also felt that defending the capital was not possible and withdrew from Seoul.

The King Seonjo group in Gaeseong received the notice of capital fallen by the Japanese forces and moved its capital to Pyeongyang, and with the report of Gaeseong fell by Kim Myeong-won failing to defend Imjingangn, it gave up on Pyeongyang to move to Uiju.

In the meantime, the Japanese forces that was on its way to north after taking brief rest after occupying Seoul in early May crossed Imjingang and divided in three units. The Gonisi Command invaded in the Pyeongan-do direction to occupy Pyeongyang in June and take it as their base. The Gato Command advanced into Hamgyeong-do captured Gwanchalsa Yoo Young-lip of the province. In particular, Imhae-gun, Sunhwa-gun and their guarding officials who evacuated to Hamgyeong-do also were captured by the Japanese forces. The Kuroda Command that came to Hwanghae-do took Haeju as its base to loot most of villages.

Consequently, in only a month after the invasion of Japan, most of areas other than the Honam region were fallen at the hands of the Japanese forces, and King Seonjo who was at Uiju was at a great peril.

However, after June, in all 8 provinces, voluntary military force and voluntary Buddhist military force were risen to defeat the Japanese forces on behalf of the government military and the victories of naval forces began to show signs of turning back the war situation. In particular, in October, the Jinju moksa, Kim Si-min, gathered military forces, government employees and citizens to gain a major victory in the first Jinju Fortress battle.