Yi sun-shin entered his path of military officer at the age of 32 and he devoted his life to defend his country and love of his country.
He did all he could for the given duties regardless of his rank and no matter where he worked as he was in petty position in the borderline, and he placed his life to rescue his country as the head of the Joseon naval force after the Imjin War breaking out.

As a military officer, the path to his love of country was not smooth. With the accusation of his superior, he was dismissed from the position and experienced to start over as a commoner, and he was successful in saving his country by winning all military battles against the enemy, but still, he had to go through the turbulent time of being executed as a traitor to his country. 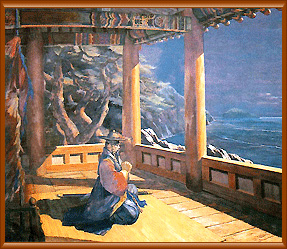 However, his mind of loving his country under such a hardship was never been in question. Until his death at the battle ground in November 1598, he practiced his love of Korea.

The firm love of country by Admiral Yi sun-shin was led to the love of people. Under the situation of fierce war situation with a full of tension, the Admiral always thought of the safety of his people first, and he truly felt for people in trouble and encouraged them and consoled them.