Breaking Down of Truce Negotiation and Re-invasion of Japan

Since the purpose of Ming Dynasty in sending its forces to Joseon was in blocking of the Japanese forces to advance to China, not to help Joseon in revitalization that their attitude for the war was much different from that of Joseon.
While the Japanese force retreated to Seoul, the military force of Ming camp sent Shim Yu-gyeong to the Japanese camp in Seoul to continue for the negotiation for truce. The Japanese forces also had lost its will power to continue with the re-grouping of Joseon forces, uprising of voluntary military force, dispatching of military force of Ming, difficulty of supply, breaking out of contagious disease and others that they would continue the negotiation for truce.

Thereafter, the Japanese forces withdrew from Seoul on April 18, and sent the entire troops to south along with the forces in Gangwon and Chungcheon-do. And, they built fortresses in the southern coastal area from Seosaengpo to Wungcheon and wait for the progress of negotiation for truce. During the process, the Japanese forces attacked Jinju Fortress for its retaliation. After the fierce battle, general of voluntary military force in Kim Cheon-il, Gyeongsang Woobyeongsa Choi Gyeong-hoe, Chungcheong Byeongsa Hwang Jin and others were killed and the fortress was fallen finally with the sacrifice of tens of thousands of casualties. This was one of the most fierce battles held during the Imjin War.

Thereafter, Shim Yu-gyeong entered into the military force of Ming of Toyotomi along with the Japanese forces with the exchange of convoys but the negotiation for truce of 2-3 years finally broken down. Toyotomi demanded to Ming Dynasty for

1. sending a royal family member of Ming Dynasty to be the queen to Japan,
2. restore the Gamhapin (certificate seal of trade),
3. yield four provinces of 8 provinces of Joseon, and
4. send 12 hostages consisting of Joseon's prince and public officials.

On these demands, Shim Yu-gyeong was concerned that these demands would not be accepted that he had the false report that Toyotomi was to be appointed as a king and permit to send the offerings for his obtaining of permit by Ming Dynasty. Therefore, in 1596, the convoy of Ming Dynasty was dispatched to have the writing that Toyotomi was appointed as the king of Japan along with the golden seal.

However, Toyotomi was enraged that he did not accept the books and seals and returned the convoy back, and attempted to invade Joseon again. Shim Yu-gyeong went back to be prosecuted to fool his country, and the long meetings of the two countries were finally broken down.

In 1597, (the 30th year of King Seonjo), the negotiation for truce was ultimately broken off and Toyotomi ordered to invade again with Gato, Gonisi and others leading 14,500 soldiers to invade Joseon again on January 15.

In the meantime, Joseon had Hansando as its Commanding base, and the Commander Yi sun-shin who had been keeping the southern coastal line was charged and imprisoned and, on his behalf, the Jeolla Jwasusa and Commander position was succeeded by Won Gyun.
The Commander of Three-province Navy of Joseon, Won Gyun, had the unskillful strategy and unreasonable fight in the Chilcheonryang Battle that he was defeated badly and he was killed in the battle. In this battle, the control on the sea that Yi sun-shin built was totally collapsed. 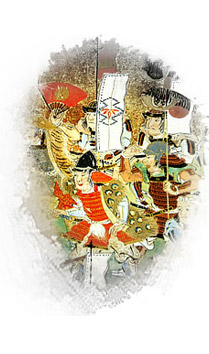