《Nanjung Ilgi》 has the value not only for the personal experience of Yi sun-shin on the war but also the objective data to know the pre-war situation and the war situation of the time.

Furthermore, 《Nanjung Ilgi》 is the data to display the situation for seven years of the Imjin War as well as personal history shown thereto that it recorded the overall status of the war situation, and it also contained the record of strategy on military affairs, strategy conference, geographic surveilance, secret training and others. 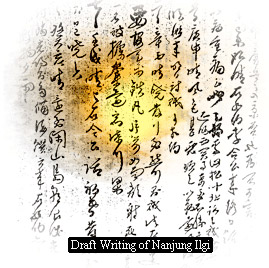 Although this was the record of the period of war that had the national destiny at the stake, it presented royalty, filial duty, trust and righteousness in simple and succinct sentences that it set the role model for the later generations.

Looking into the contents of the diary, it disappears his noble personality, humane agony, and deep royalty to the country in every corner of his diary. With the careful and stringent classification of public affairs and private affairs and flawless work disposition, and the affection to subordinates was very clear as well as strict application for rewards and punishment. Furthermore, there were records on outspoken thoughts on national administration and others shown in military man-like magnificent writing that it has substantial value as an art work.

In a study of bibliograph of a heroic person, 《Nanjung Ilgi》 was second to none. It was the record of a man triumphed in the war as well as turbulent individual in the process of his emergence, placing under arrest in jail, torture and service as a commoner during the period of war. In addition, this was an important data to study the history of Joseon naval force and the Imjin War with the articles on many parts, such as, politics, economy, social status, military affairs and others along with the detailed record of battles that he was engaged in.

For this reason, 《Nanjung Ilgi》 was the true and genuine story of Yi sun-shin who was the victorious general in the Imjin War that it had the sufficient value by itself as well as the most important data in studying his personal achievements or studying the Imjin War.