The Battle of Salamis

It was one of major battles of Graeco-Persian wars which took place from B.C. 492to B.C. 448. Although, this battle has less fame than another major field battles, such as the Battle of Marathon and The battle of Thermopylae, it was turning point for the Athens.

Conflicts between Persian and Greek

At that time, the world was under control of the Persian Empire. Persians established immense empire from West Asia to Cacausus areas. To expand their land to the west, this thriving empire had to conquer Greek city states. They constantly invaded Greek through many their king's reigns.
The battle of Salamis took place during the reign of Persian king, Xerxes, the son of Darius the Great of P
ersia whom invaded Ionian area. Several city-states in Ionia confederated and rose in rebellion against Persian Empire. 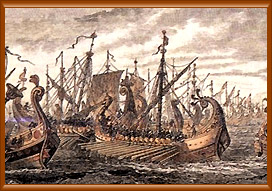 The Battle of Salamis

Darius the Great sent Persian army and put down a rebellion. When Ionian city-states asked aides, only Athens sent army for them. Consequently, the Persians settled the plan to invade Athens and another Greek city states which allied with Ionians.

When Persians invaded Greek mainland again, Athenians confronted Persian large forces in the field of Marathon, which is situated in north-east from Athens. After this battle, one messenger ran to the Athens and conveyed the victory of their army. He died when he accomplished his mission. His mission became the inspiration for the Marathon race of modern Olympic Games.

Darius, the Great planned the invasion to the Athens again, but he died before he carried out plans and this mission was handed down to his son. Xerxes wasn't warlike man, but his followers didn't let him stay in Persia. He settled invasion plan and gathered men from his colonial areas. When he was ready to war, his army marched to the Greek mainland. Herodotus assumed Persian army was around 5.28 million, but modern Sagas calculated estimated army was 360,000.

They marched down along coastline, because their navy supplied food and arms. Finally, Persian army arrived at Takis of Malis which is located nearby Thermopylae, this was the key point of the Central Greek. If Greeks lose this area, Athens might be devastated by Persians. South Greek 31 city states allied and sent their army against Persians. Spartans were the leader of this allied army.

At August 18, B.C.480 the battle of Thermopylae had joined, Leonidas, a king of Sparta confronted Persian army with 7,000 Greek army. Persian army was twentyfold than Greeks. For two days, Persians couldn't defeat small Greek army. Crafty Xerxes asked to the Spartan traitor the shortcut which is directly connected to Thermopylae. Soon, the Persian contingent took a shortcut. Greek allied army suggested to Leonidas to retreat from Thermopylae, but this brave king and his 300 bodyguards left and had battle with Persians.

While Leonidas and his army were in the battle, Greek city states' fleets were gathered at Artemisium and mainland to support Greek army in Thermopylae. Xerxes penetrated this Greek strategy and sent his naval fleet to here.

On the way to Artemisium, Persian fleet lost a lot of warships during a heavy rainstorm. And they lost more warships at the Battle of Artemisium. This was one of the reasons which Greek fleet defeated Persian fleet at the Battle of Salamis. However, Greek Historian Herodotus claimed that Persians filled the loses by another Greek city states in Aegean Sea which were under the Persians.

When Greek fleets were told the defeat of the Battle of Thermopylae, they withdrew and headed to the island of Salamis to evacuate their people from their states to another safe place.

After Athens escaped to the island of Salamis, the leaders of 31 united Greeks had meeting. Spartans asserted to withdraw to the Strait of Korint which is located nearby their land. Athens opposed to this idea, because they knew their people would be scapegoat of massacre by Persian army.

The result of meeting was in the dark. Themistocles went out of meeting site and thought the way to let Greek fleets stay in island of Salamis. After few minutes, he sent his dutiful and Persian slave to the Xerxes with the letter. He wrote the division of united Greeks and made Xerxes to believe they would win if they attack this island as soon as possible.

Xeres made an order to their navy to attack Greek fleets in island of Salamis. When Greek leaders were told the Persian fleet was coming to the island, they had no choice. They prepared the battle.

While Greeks were preparing the battle, Xerxes were at the mountain Aigaleos to observe the battle. By his side, his entourage wrote down the name of the warship which destroyed much Greek warships.

The Persians divided their fleet to send some ships around the island and made them to cut off the Greeks. Remaining warships had to divide their fleet again, cause the islet in front of the island of Salamis. They sailed into the Strait of Salamis, while Greeks were making a line of battle. 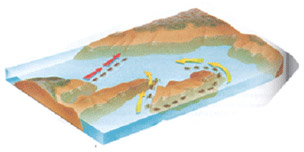 Greeks pretended to be overwhelmed by the Persian fleet and tricked the Persians to believe that Greeks were retreating. Though Persian ships were not easy to enter the strait of Salamis, they suddenly entered into the sea to chase Greek warships. Soon, Persian warships were mixed together and couldn't move either forward or backward. 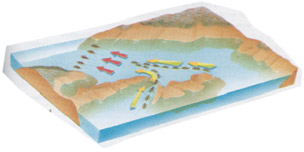 When Persian warships entered, Greeks winded a ship and attacked first. Themistocles' strategy was to break the line of battle by their ships' bronze ram. Greek ships started rammed down Persian warships gradually and they surrounded Persians. The Persian warships at the front line were trying to retreat, but their rout of retreat was stuck by another Persians ships. While Greeks lost only 40 ships, Persians lost about 200 warships and they were sunk in the 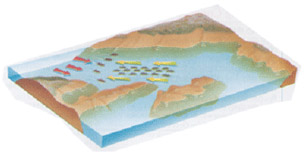 The Athens' fleet led the victory and the Golden Age of Athens started by this battle. After this battle, Persians invaded Athens again, but Greeks defeated them. When Graeco-Persian wars were ended, Athens established Athenian Empire and Greek became one of the powerful countries in Mediterranean Sea. The Modern Hellenic Navy celebrates this day's victory as Battle of the Salamis day in every 12 September.

On the other hand, Persian Empire had more frequent rebellions in their colonial areas. It lasted 150 years more, till the Alexander the Great defeated the last Persian king's army.