The Battle of Calais

It was a part of Spanish Armada's campaign against England. Spanish Armada-fleet in Spanish- sailed toward England to return her as a catholic country and retaliate English pirates' buccaneering. Though Spaniards had outstanding land forces, they failed to embark them and anchor any port of England neither Scotland. English defeated Spaniard at the English Channel off Gravelines near by Calais. After this battle, Spain gradually lost her dominance at sea and it gave a chance for England to be a new power at sea .

In 1517, a German priest, Martin Luther released The 95 Theses and his ideas spread through the European continent phenomenally. Though, he was excommunicated from Roman Catholic Church, his doctrine inspired the Protestant Reformation. By the Peace of Westphalia, the Protestant Princes of Germany gained the right to choose their states' religion.
As time goes by, Protestantism was welcomed in most European countries and the conflicts sparked between two religions was drifted into war. England broke with Rome during reign of Henry VIII. 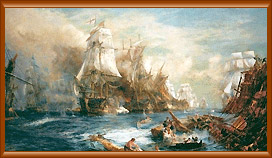 The Battle of Calais

He closed all Roman Catholic abbeys and monastery and seized their property and announced that he's the head of English Church. He conducted this religious rebellion against Rome, because the Rome disapproved his divorce.

This religious conflict reached climax in France on 24th August, 1572. Hundreds of French protestants, Huguenots were butchered by Catholics at the wedding of Princess Marguerite. Catholic dominant countries, Spain and France hailed this massacre. He dispatched the army to the Netherlands which was under control of Spain in order to suppress Protestantism. This sparked the movement of independence of the Netherlands. In 1566, Protestant party in the Netherlands rose in rebellion on the behalf of England. Ironically, his suppression policy became the one of reasons of defeat at the Battle of Gravelines. Dutch protestants interfered the embarkation of Spanish land forces.

Conflict between England and Spain

At late 16C, Spain was powerful state, and she possessed many colonies in American continent. Philip II, King of Spain was sincere Catholic and his ambition to be a ruler of England never subsided. While Spain was concentrated in the holy war against Turks and Protestantism, Elizabeth I, the Queen of England dispatched Francis Drake to the Spanish Main and encouraged English to pirate Spanish ships.

Beside, she followed her father's religious policy and supported the Protestant dominant countries in the continent, the Netherlands for instance. She gave aides for Protestants in the Netherlands to protect this area from Spain. 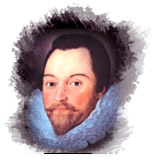 The distance between England and this land wasn't so far, thus Spaniards in here was huge threat to the England. Spaniards had ships to carry strong land forces from this area to the England. For these reasons, Elizabeth always had contacts with Dutch.

The presence of Elizabeth's pirates at sea was one of the biggest obstacles to Spain. Philip regarded English ships since July, 1580 and accused Drake due to his piracies in the West Indies and Atlantic Ocean. He occasionally sailed to the West Indies and sacked the Spanish colonies or Spanish ships on their return way to their mother country. However, Elizabeth gave him the honor of knighthood. In the mean time, England dispatched army to the Netherlands and joined the independence war against Spanish rule in 1585.

Philip determined the invasion plan of England shortly after he was told the execution of Mary, Queen of Scotland. Catholic Mary was supposed to overthrow Elizabeth's throne on the behalf of Spain. Philip exaggerated his invasion plan as a holy war against Protestantism to gain support from the Rome. In the end, he gained the authority of invasion. But, it crashed by Drake whom drove his ships and burnt a half of Spanish ships which were anchoring at Cadiz in 1587. These ships were carrying war supplies and these were supposed to be used during the invasion of England. By this unexpected attack, Spanish lost lots of war supplies and warships and Philip had to suspend his invasion plan.

Spanish invasion plan was settled by veteran sailor, Marquess of Santa Cruze at first place. He was supposed to conquer Ireland and, then would march to the England. But this plan was scattered after his sudden death. Duke of Medina succeeded him. He was great soldier but, inexperienced at sea battles. It was one of reasons why Spanish lost this campaign. Philip's plan was focused on combining his fleet with Parma's land forces off Spanish Netherlands. He and his councilors were convinced that battle-trained Spaniards would defeat English army if they land on England.

English knew the importance of collecting information more than Spanish. They collected information from various routes. English prime minister, Francis Walsingham spied on Spain through his person in Spanish palace. According to England documents, he already knew Spanish plan about 1 year before the invasion. England immediately conducted defense strategy and ensured the cooperation of Protestants in Netherlands. In same time, English redesigned their warships and built more ships.

The progress of Spanish plans, the structure of fleet and their commanders' name were updated by English spies in Spain. According to the letter was sent to the English government, 130 ships including 4 galleases and 4 galleys were prepared for the invasion, while Don Alonso di Lieva was appointed as the general in charge of the Spanish land forces. A Spanish ship was sent to Calais to set up the plan with Parma's army before fleet departed. This letter was based on a captain's letter of Italian ship, was being worked for the Spanish government.

Spanish sail to the England

Armada sailed off Lisbon and headed to the Flanders, present-day territory of France, Belgium and the Netherlands, which Parma's land forces were awaiting the arrival of them, but their sail was delayed due to heavy rainstorms. In the middle of July, Spaniards could reach western part of English Channel. On July 30, Armada was observed from the Cornwall while the English fleet was anchoring at the Plymouth port. Armada was in formation of crescent and advanced to the Flanders along the English Channel. After first battle, Lord Admiral divided fleet into four squadrons, which led by himself, Vice admiral, Rear Admiral and Sir Martin Frobisher. They attacked Spanish fleet from time to time. During these attacks, one ship was captured by Drake and one ship was burnt by mistakes. Although English couldn't give much damage to Spaniards, they made Spaniards to consume ammunition. Medina-Sidonia sent messages to Duke of Parma and asked him to prepare ammunition for his fleet. On the contrary of them, English fleet could replace ammunition, drink water and foods from near by ports. This was the one of reasons why English could prevent the invasion of Spaniards.

On 6-7th August, Armada anchored near by Calais where Parma's army would join them. It wasn't easy to anchor in here due to their ships' size, they waited Parma's transport ships, pontoons from there. English fleet also anchored beside Spaniard fleet. Medina Sidonia already sent his messenger to Parma before his fleet reach Calais, but Parma's army were never shown. At that time, Parma thought this invasion would be failed, therefore he sent his army into the inland according to newly released Spanish research.

On August 6, southwestern wind began to blow, it was prevailing wind for the English fleet. Armada couldn't proceed toward to England due to this wind. Around midnight, English sent fireships to the middle of Armada, Spaniard sailors guessed these ships would be exploded in a minutes, they cut cables which link ships and sailed off. Armada's formation in crescent dispered by this, the chance to defeat Armada had come for the English. Before Medina Sidonia refit the formation, English warships attack Armada off Gravelines, near by Calais. Spaniards attempted to board ship and had fights on English ships, it was representative tactics of them. To avoid boarding tactics, English ships discharged guns from distance and avoided closeness of Spanish ships. Spanish ships carried more cannons which the range is short and their recharge time was longer than English ones. English ships discharged fire simultaneously. Spaniards ships were stuck in the middle between English fleet and coast of Low countries. Suddenly, wind changed and Spaniards could sail off to the north.

Spaniards was supposed to sail back to the English Channel, but storm led them to the north only. They gave up the invasion plan, because they already ran out of ammunition and foods. There's only one way to return home for the Spaniards, Medina Sidonia commanded to retreat and planned to sail back around Scotland and Ireland. The king of Scotland, James didn't allow Spaniards to anchor at his land, he was supposed to be granted the throne from the Elizabeth. He did not want to disturb the mind of Queen.

On their way to Spain, Spaniards were suffered from heavy storms and starving. Starving Spaniards landed on Ireland, but they were killed by the army of Elizabeth. The Medina Sidonia could reach Santander on September 13 after he lost a half of his fleet and hundreds of sailors.

After this battle, the war between England and Spain lasted till the treaty of London joined in 1604. England kept supporting the Protestants in the Netherlands and snatching Spanish ships which carried huge amount of gold and products from Spanish colonies in America. As time goes by, the fame of Spanish Invincible Armada was faded, nevertheless this was rebuilt later. It became the reason why Spain gradually lost her dominance at sea. As Spain lost her power, England gained power at sea. England established East India Trading Co. in 1600 and it became the foundation of English Empire. She acquired the colony, Virginia-this was named after Elizabeth I- in North America in 1604.