Also, in 1415 (the 15th year of King Taejong), there was a sangso submitted by Jwadaeon Tak Sin with the contents on the military preparation that "the turtle ship would make many collisions with the enemies but it wouldn't be harmed by the enemy that it had to be a great action plan. We plead to make it more firm and sophisticated to equip with the tools for victory." (Vol. 30 of 『Record of King Taejong』, July of the 15th year of King Taejong, Eulmi) This is an indication on contemplation on the turtle ship in the early time of Joseon already. However, there is no detailed record to learn what it looked like and how large the ship was.

In the meantime, looking at the other documentary record, there was a case of contemplating the ship similar to the type of turtle ship although it was not realized. On the sangso that was submitted to the prince by Lee Deok-hong who guarded the prince in 1592 while Yi sun-shin had his name known about the strategies of the turtle ship and the benefits of the turtle ship. He described the turtle ship system as the "back having the swords with steel on the head and had the panok on the middle with the arrow shooters inside......." and in addition, "as I heard, the naval generals in Honam use this ship to destroy the enemy ships." On the following year, he attached the conceptual drawing of the turtle ship on his sangsomun to the king to propose construction of such ships. (『Ganjaejip』 Vol. 2)

The turtle ship that we frequently mention means the battle ship that Chungmugong Yi sun-shin built. However, the turtle ship appeared on several documents found to this point recorded only the general external appearance and its battle capability but there is no record of indication for detailed dimension required for actual shipbuilding. Therefore, there was no telling of relationship between the turtle ship at the time of King Taejong and the turtle ship mentioned by turtle ship. Only thing that is known was that the turtle ship during the Imjin War was built by military officer, Na Dae-yong and others, with the idea came from Yi sun-shin. 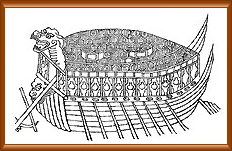 Turtle ship of Jeolla Jwasuyoung
As the turtle ship asserting its function as the leading ship in the battle during the Imjin War the appearance made a little change at a time after the war, and the dragon head was changed into the turtle head with the dimension enlarged in general with much larger size later. Some 200 years after the Imjin War, in 1795 (the 19th year of King Jeongjo), the data on Yi sun-shin and the turtle ship were gathered comprehensively under the decree of King Jeongjo and issued the 『Entire Collection on Yi Chungmugong』 with some recording of partial dimension needed for shipbuilding along with the 'turtle ship of Jeolla Jwasuyoung' and the 'turtle ship of Tongjeyoung'. This is the most detailed data available in the study of the turtle ship. 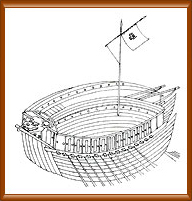 Jeolla Jwasuyoung &
Turtle ship of Tongjeyoung
In addition, there are a few more picture data that may outlined the appearance of the turtle ship at the family of Yi sun-shin.
There are two turtle ship pictures held by the family of Yi sun-shin. These turtle ships have different looks from the turtle ship in 『Entire Collection on Yi Chungmugong』. There were some that had the seat for the commander, like the panokseon and one that had no dragon head that some researchers argued that the head of the turtle ship might be moved in and out based on this drawing. And, there are some 10 pictures of the turtle ship depicted on the Training Drawing on Naval Force of the later part of Joseon. This picture is frequently known as the Folding Picture of Hakik-jin of Yi sun-shin but in fact, this drawing shows the scene for the naval forces in Three-provinces joined for script-formation. In this picture, there is a turtle ship with many poles to show. This implies that this type of turtle ship was generalized at least after the 19th century.

And, in a daily newspaper in the middle of 1990s, the turtle ship picture held by New York Seamen's Museum was disclosed on the book of 'A Pictorial Treasury of the Marine Museums of the World' (Crown Publishing Company in the US, 1967). This picture attracted a great attention at the time but some raised question as if it might have been produced for a model.

In the meantime, there were two pieces of pictures that attracted the attention as detailed data to display the shape of the turtle ship. An ancient drawing estimated to describe actual appearance of the turtle ship in the Joseon Era was disclosed by a Korean businessman in 2004. 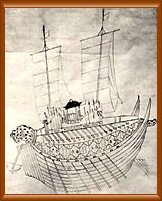 Two turtle ship
picturesheld by the
family of Yi sun-shin

This drawing had the different details on the silk fabric of 176㎝ in length and 240㎝ in width and it had the appearance of four ships with the body of a turtle and the head of dragon. Also, it described in details for the generals in conference on the turtle ship, and the soldiers checking on their weapons on the panokseon and small ships, and civilians who were carrying around the goods.

In particular, the turtle ships in the front and middle described on this picture looked similar to the turtle ship of Tongjeyoung and the two turtle ships on the back looked similar to the turtle ships of Jeolla Jwasuyoung. They looked similar, not the same. In addition, they were not low enough to not having the 2-story structure, as had been thought before, and it had the high cover to have the battle space to shoot the bow with loading of guns. Furthermore, it had the pole on the highest floor, just like a panokseon. In addition, the first turtle ship showed the appearance of combat soldiers working on something with the guns loaded inside the open door and the location clearly showed that it was the second floor above the space to row. This is likely to show that the upper structure of the turtle ship having the 2-story structure separated for the space for rowing and the space for battle. In this aspect, some of the scholars thought that the turtle ship might be in 3-story structure for having declined combat capability if the row and guns are arranged in the same floor, and this picture supported the 3-story theory even more. However, the turtle ship in similar shape with the Tongjeyoung turtle ship also was likely to have the two-story structure that it is not to be decisive evidence.
In particular, the picture has the partial remains of mineral pigment that was initially used on the dragon head, shield, flag and others, but some has the overlapped painting, and the drawing style, color and others are similar to that of the Japanese painting style that there is more finite verification on it.

Another picture is the one that was drawn around 1940 under the name of the 'Joseon Naval Battle Drawing'. The painter was Ota Tenyo (1884~1946) who painted on a number of historic events in Japan and many of his works have been displayed in many museums. This drawing also has a high probability of producing for a type of 'propaganda' to display the military strength of the Japanese navy since it was the cover of history book of Japanese Naval History published in Japan. Therefore, there may be some distortion, but this picture is very precise in depicting the battle situation then. This was attributable to the fact that the artist had high level of insight on history and drew the work on the basis of his research data on the Joseon naval force and the Joseon vessels not known in Korea. In particular, the point to pay attention would be the turtle ship that has a similar look with the turtle ship of Tongjeyoung, shown on the left side of the drawing. It would require closer look but it would be available to assume the appearance of the turtle ship that Yi sun-shin built.