Yi sun-shin was born on March 8, 1545 (western calendar of April 28) in Geoncheon-dong, Seoul as a third son for his father, Yi Jung, and his mother, Chogye Byeong. He was born in Dried stream village (Geoncheon-dong) and it is near to 40 Inhyeon-dong 1-ga, Jung-gu of Seoul today.

His clan was mainly the civil functionaries from Yi Don-soo who served as Jungrangjang under the Goryeo Era and Yi sun-shin was his 12th grandson. His family began to be influential for its forth generation under the Joseon Dynasty. The 5th ancestor, Yi Byeon, served as Youngjungchubusa and Daejehak of Hongmungwan, and his great great grand father, Yi Geo, served as the Byeongjo Chamui. However, when Yi sun-shin was born, his family had long been declined. 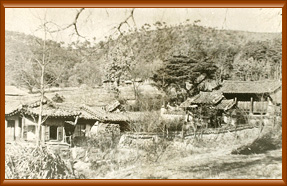 Notwithstanding such a situation, he became one of the all-time great general in Korea for his influence coming from his mother while he was a young child. Lady Byeon was a wise mother who loves her sons dearly but raised them in strict family education. There were tow older brothers in Hee-sin and Yo-sin and one younger brother in Woosin for four brothers. The brothers' names had the last word in '-sin' that came from the name of great kings in China with three-emperor and five ruler with Kings of Bokhee in Yo, Soon, and Woo.

His home in the rural area was in Baekam-ri, Yeomchi-myeon, Asan-gun, Chungcheongnam-do, but his spent most of his youth time in his birth place of Geoncheon-dong, Seoul. In his younger days, Yi sun-shin played with other children, enjoying the war games with them, and the other children always had Yi sun-shin as their leader. And, he loved to take the arrow and bow in his younger days. He always said the right things if anyone did anything wrong that even the adults in the village treated Yi sun-shin like an adult. As such, Yi sun-shin was born with the great morale in his bones. 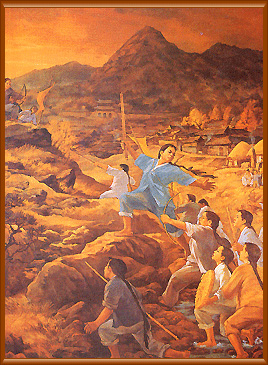